​The Northern Wells area comprises of two exploration licences E37/1343 and E37/1344, the total area is 175.52 sq km. These will be 100% owned by Kingwest Resources Ltd upon final grant by the WA Department of Mines.

The Northern Wells project is located approximately 95km northeast of Leonora, 70km north on the Leonora-Leinster sealed road to Bundarra, and then NNE for 25km along the Darlot Rd. 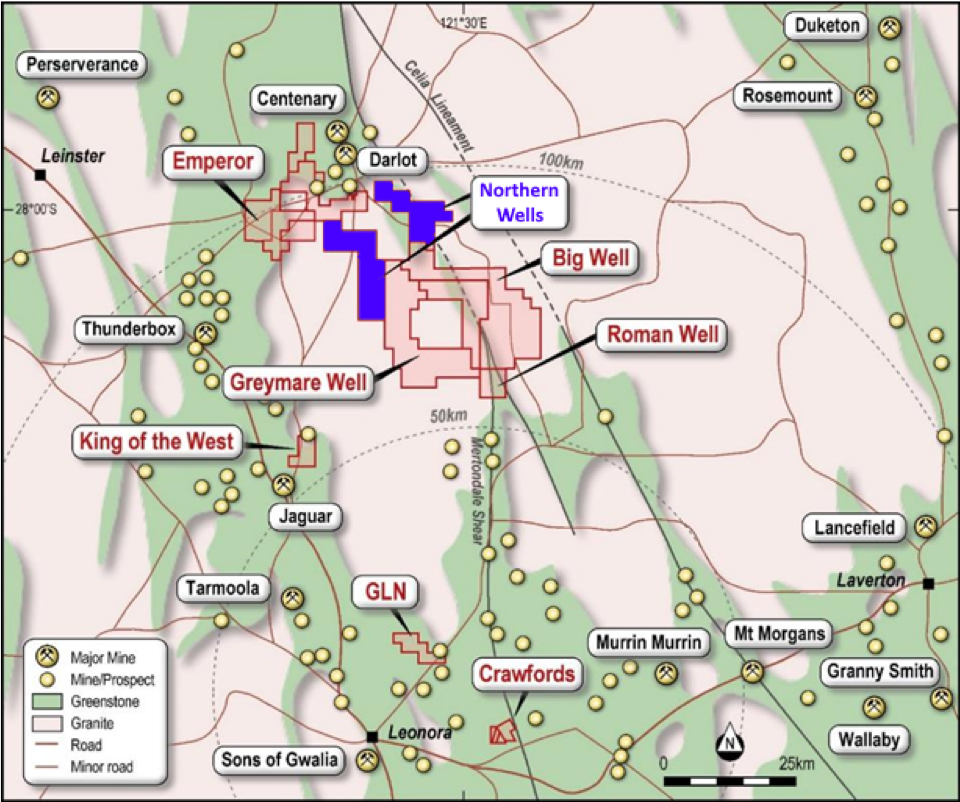 Location of the Emperor Project

The tenements lie within the Norseman-Wiluna greenstone belt of the Yilgarn Craton. Mapping by the Geological Survey of Western Australia over the tenements identified granite to granodiorite as the primary bedrock lithologies. A major portion of the tenement holding is covered by colluvium/alluvium.
​
Geological mapping and interpretation of the area by AMIRA identified zones of undifferentiated greenstones in the area. The Mertondale Shear is also interpreted to extend through E37/1344 based on aeromagnetic data interpretation.

The Northern Well tenements have only been the subject of low level early stage exploration in the past. Geological mapping and interpretation of the area by AMIRA identified zones of undifferentiated greenstones. Previous exploration by Normandy Mining Limited in 1998 consisted of a gravity survey which sought to delineate greenstones within the generally granitic domain. The survey indicated a gravity high, interpreted to be due to the presence of greenstones. Interpretation of the multi-client aeromagnetic data collected by World Geoscience Corporation (WGC) identified a series of moderate-high magnetic units which corresponded with the position of the gravity high. As with the gravity anomaly, the cause for these magnetic signatures remains unclear. Interpretation of multi-client aeromagnetic data indicated a linear magnetic feature correlating to the gravity high, however ground mapping failed to identify greenstone lithologies with the tenements generally covered by colluvium/alluvium.